New federal support for Canada’s pandemic-battered airline industry will be contingent on carriers providing refunds to passengers whose flights were cancelled, the government announced on Sunday.

Transport Minister Marc Garneau laid out the requirement as he announced that Ottawa is ready to respond to the sector’s desperate pleas for federal assistance by launching talks later this week.

Canada’s commercial airlines have been hit hard by COVID-19, with passenger levels down as much as 90 per cent thanks to a combination of travel restrictions and fear of catching the illness.

That has prompted airlines to furlough hundreds of pilots and technicians and discontinue dozens of regional routes since March. They have also cancelled numerous pre-booked trips, offering passengers credits or vouchers instead of refunds.

Many Canadians have since expressed anger over not getting their money back. The Canadian Transportation Agency received 8,000 complaints between mid-March and the end of August, most of which are believed to be related to refunds.

CBC News has learned that despite receiving thousands of complaints from travellers looking for refunds for flights cancelled due to COVID-19, the Canadian Transportation Agency has not settled a single one. 1:59

Passengers have also filed a handful of proposed class-action lawsuits and three petitions garnering more than 100,000 signatures that call for customer reimbursement.

Garneau acknowledged the challenges facing the sector as he revealed the pending talks.

“The air sector cannot respond to these challenges on its own, given the unprecedented impacts on its operations,” Garneau said in a statement.

“We are ready to establish a process with major airlines regarding financial assistance which could include loans and potentially other support to secure important results for Canadians,” he said. “We anticipate beginning discussions with them this week.”

Yet Garneau also made clear what the government would be demanding from airlines, starting with refunds of what is believed to be millions of dollars in prepaid flight tickets and a curb on cancelled routes.

It was not immediately clear whether that would include pushing Air Canada and others to resume dozens of routes that are currently suspended. 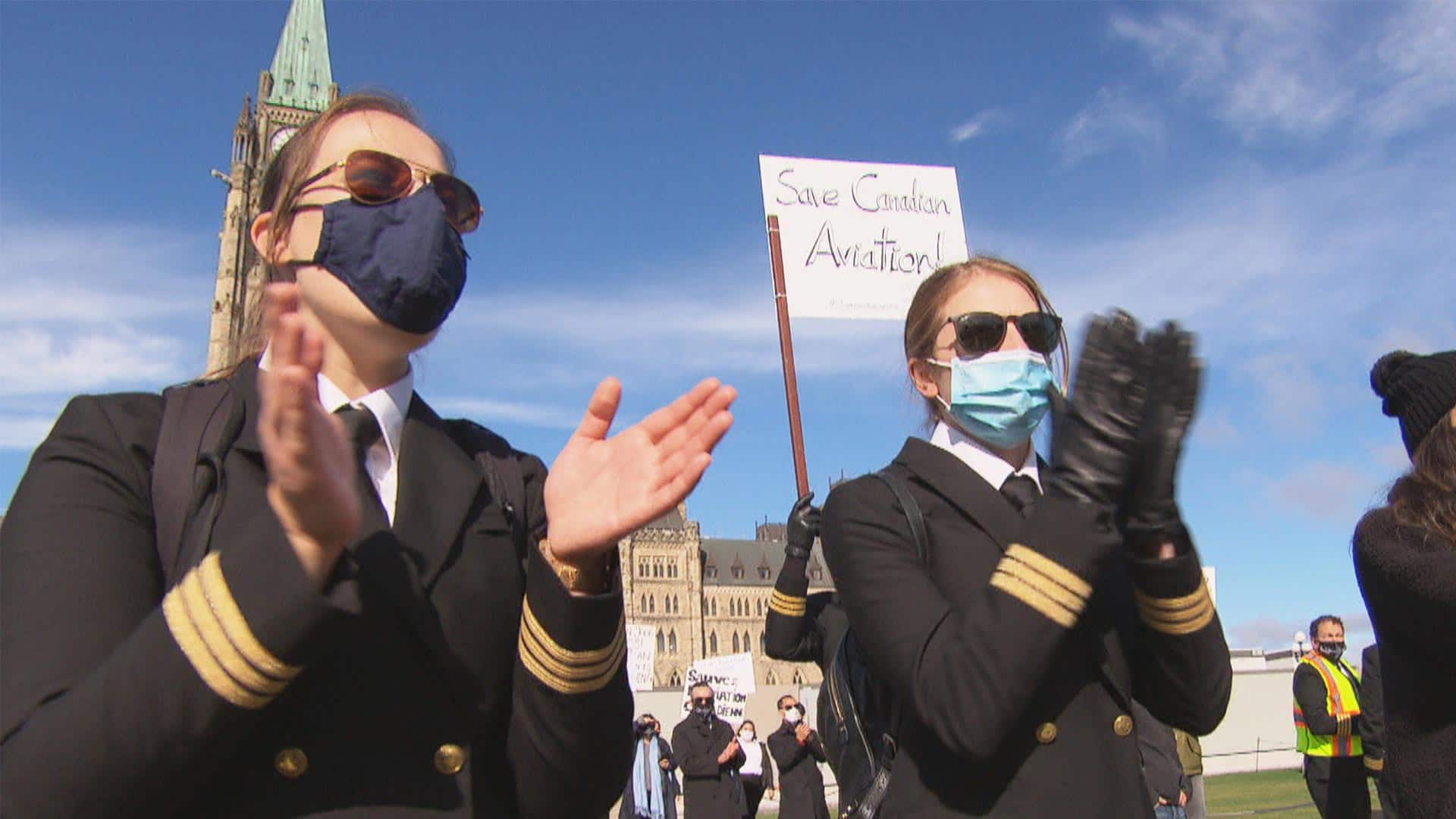 Pilots, flight attendants and other aviation workers protest on Parliament Hill, frustrated that Minister of Transport Marc Garneau has not come up with an industry aid plan, seven months into the pandemic. 1:53

In contrast to Canadian authorities, the European Commission and the U.S. Department of Transportation have required airlines to refund passengers for cancelled flights.

The U.S. and European countries including France and Germany have also offered billions in financial relief to struggling carriers. Ottawa has provided no industry-specific bailout to airlines.

The pandemic has devastated the airline industry, with billions of dollars in losses for Canadian carriers amid grounded flights and tight international borders.

Canadian airline revenues in 2020 will fall by $14.6 billion or 43 per cent from last year, according to estimates in May from the International Air Transport Association.

Conservative transport critic Stephanie Kusie attacked the government for not doing more sooner while noting that Garneau did not provide a timeline for when an aid package would be ready for the aviation industry.

“The Trudeau government has already kept Canadians who depend on the aviation sector waiting for months,” Kusie wrote on Twitter.

“Conservatives will work to ensure that the Liberal government’s plan puts the interests of workers and passengers first, and allows our aviation sector to recover.”

‘By no means a fait accompli’

The tough words around refunds were cautiously welcomed Sunday as a good first step, while others called for a federal action plan on testing and domestic travel.

“It’s the starter pistol, but it’s by no means a fait accompli,” said Canadian Automobile Association vice-president Ian Jack, whose organization is one of the largest retailers of vacations and leisure travel in Canada.

“We’ll be watching these negotiations closely. There is now a concrete, on-the-record commitment from the government that we expect them to honour.”

Mike McNaney, president and CEO of the National Airlines Council of Canada, said in a statement on Sunday that he is “encouraged by the government’s decision to work with carriers to try and stabilize the sector” but stressed more help is needed.

“In addition to financial support, a federal testing strategy for aviation is critical to ensuring the industry is able to safely restart, address regional travel restrictions and international border measures,” McNaney said.

“While we welcome direct support to carriers, we must also prioritize the development of a Canadian domestic travel framework and a national plan for rapid testing,” Kenney said in a statement.