The session is without Barrett after three long days of public testimony in which she stressed that she would be her own judge and sought to create distance between herself and past positions critical of abortion, the Affordable Care Act and other issues.

Her confirmation to take the seat of the late Justice Ruth Bader Ginsburg seems inevitable, as even some Senate Democrats acknowledged.

Sen. Lindsey Graham pushed past Democratic objections to set the panel’s Oct. 22 vote on recommending her confirmation even before final witnesses testify before and against her nomination.

“This is a sham,” said Democratic Sen. Amy Klobuchar of Minnesota, arguing the process of filling the seat should wait until the election winner is decided. .

“You don’t convene a Supreme Court confirmation hearing, in the middle of a pandemic, when the Senate’s on recess, when voting has already started in the presidential election in a majority of states,” added Democratic Sen. Chris Coon of Delaware.

But Republicans countered that Trump is well within bounds as president to fill the court vacancy.

Texas Republican John Cornyn said he understood Democrats’ “disappointment, but I think their loss is the American people’s gain.”

Facing almost 20 hours of questions from senators, the 48-year-old judge was careful not to take on the president who nominated her and sought to separate herself from writings on controversial subjects when she was an academic. She skipped past Democrats’ pressing questions about ensuring the date of next month’s election or preventing voter intimidation, both set in federal law, and the peaceful transfer of presidential power.

She also refused to express her view on whether the president can pardon himself.

“It’s not one that I can offer a view,” she said in response to a question Wednesday from Democratic Sen. Patrick Leahy of Vermont.

Democrats raised those questions because Trump has done so himself.

When it came to major issues that are likely to come before the court, including abortion and health care, Barrett repeatedly promised to keep an open mind and said neither Trump nor anyone else in the White House had tried to influence her views.

“No one has elicited from me any commitment in a case,” she said.

Nominees typically resist offering any more information than they have to, especially when the president’s party controls the Senate as it does now. But Barrett wouldn’t engage on topics that seemed easy to swat away, including that only Congress can change the date that the election takes place.

WATCH l Barrett asked about the justice she would be replacing: 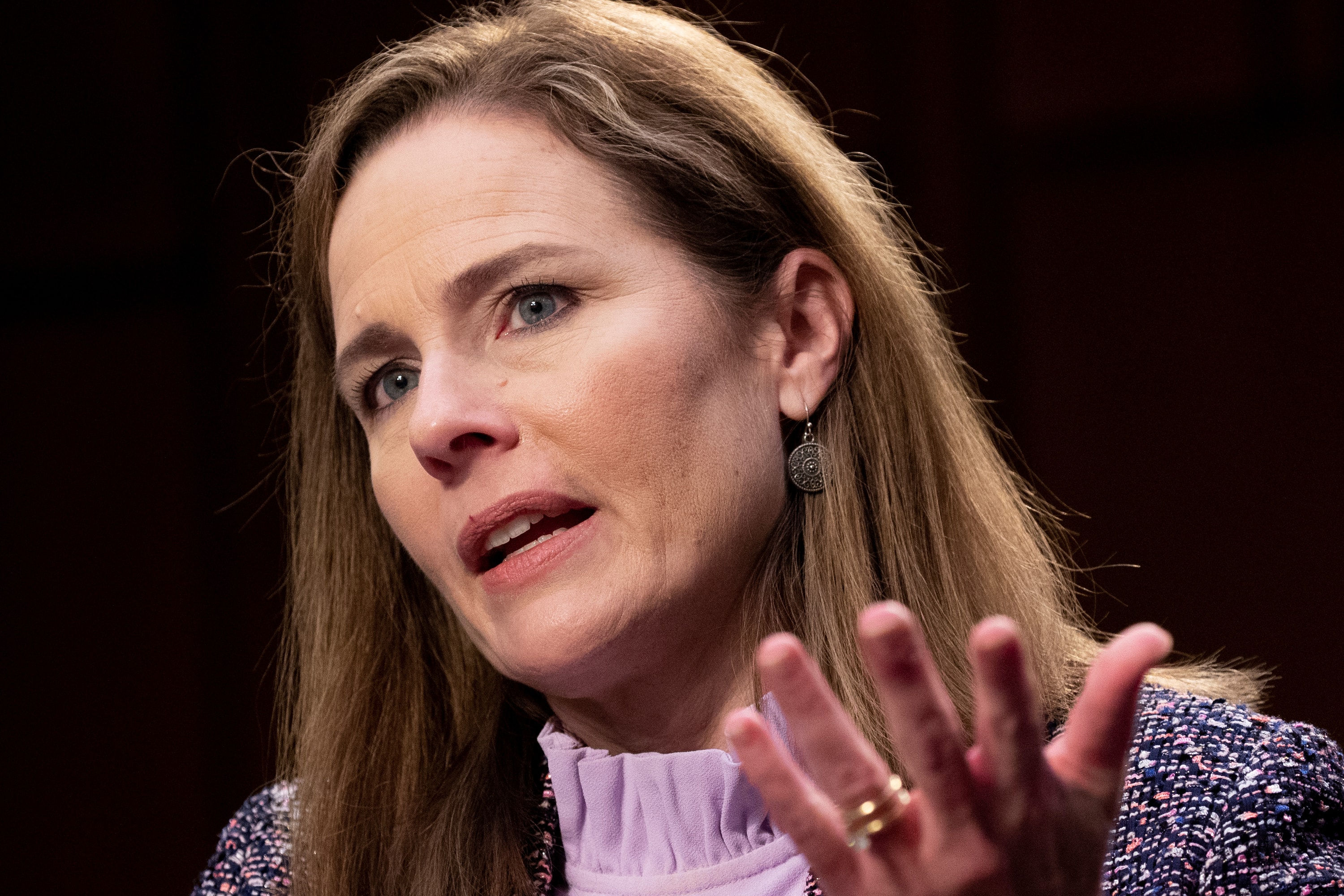 Republican Senator Joni Ernst asks U.S. Supreme Court nominee Amy Coney Barrett how she would respond to people who say she is not an adequate replacement for the late liberal Justice Ruth Bader Ginsburg. 2:35

Barrett said she is not on a “mission to destroy the Affordable Care Act,” though she has been critical of the two Supreme Court decisions that preserved key parts of the Obama-era health care law. She could be on the court when it hears the latest Republican-led challenge on Nov. 10.

Barrett is the most open opponent of abortion nominated to the Supreme Court in decades, and Democrats fear that her ascension could be a tipping point that threatens abortion rights.

Republican senators embraced her stance, proudly stating that she was, in Graham’s words, an “unashamedly pro-life” conservative who is making history as a role model for other women.

Republican Sen. Josh Hawley of Missouri said there “is nothing wrong with confirming a devout pro-life Christian.”

Barrett refused to say whether the 1973 landmark Roe vs. Wade ruling on abortion rights was correctly decided, though she signed an open letter seven years ago that called the decision “infamous.”

Democrats pressed repeatedly on the judge’s approach to health care, abortion, racial equity and voting rights but conceded they were unlikely to stop her quick confirmation. 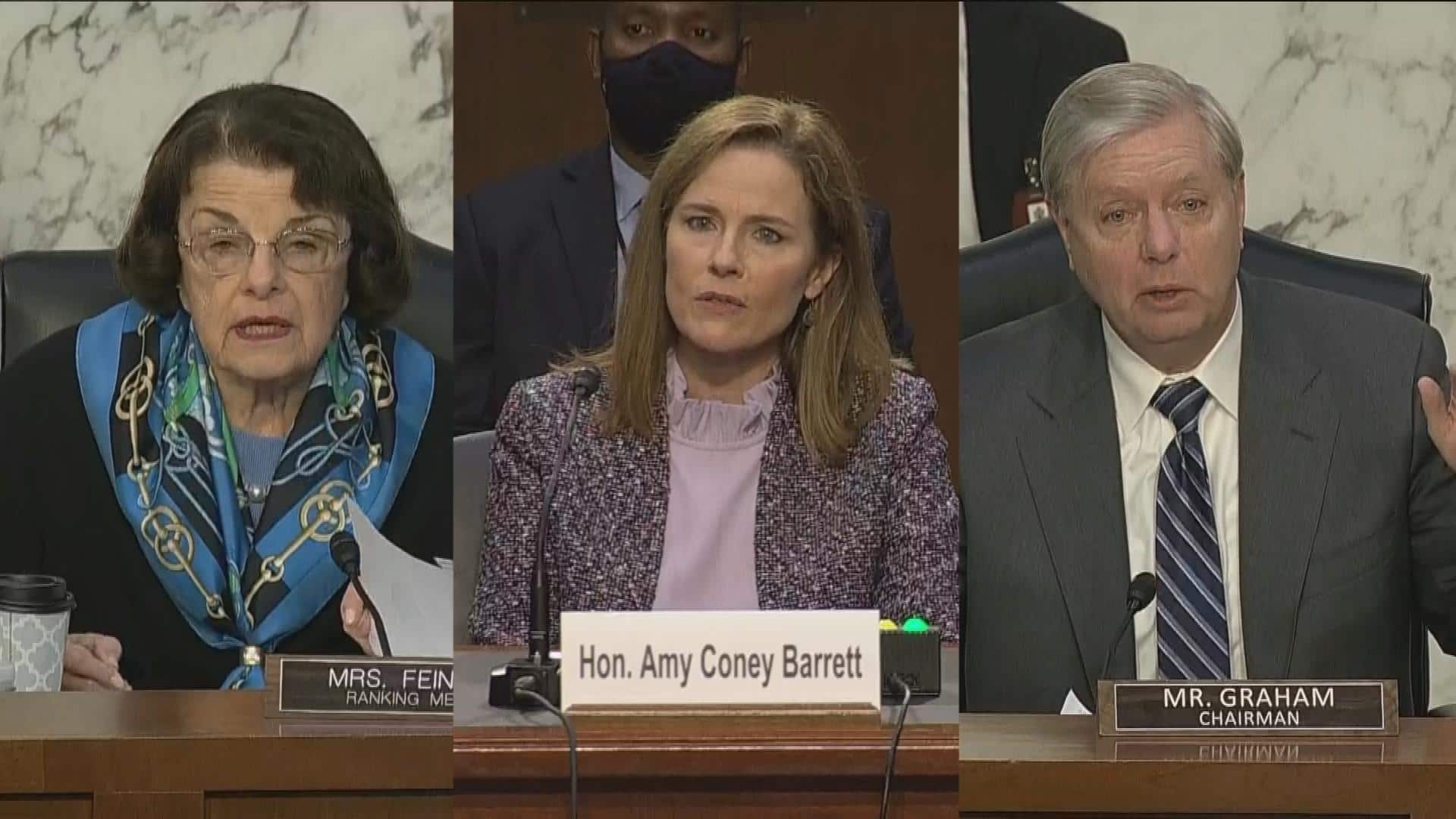 In an exchange with California Sen. Dianne Feinstein, the top Democrat on the panel, Barrett called the Voting Rights Act a “triumph in the civil rights movement,” without discussing the specifics of the earlier challenge to it. The court will hear another challenge to the law early next year.

One of the more dramatic moments came late Wednesday when Barrett told California Sen. Kamala Harris, the Democratic vice-presidential nominee, that she wouldn’t say whether racial discrimination in voting still exists nor express a view on climate change.

Harris asked if she agreed with Chief Justice John Roberts, who wrote in a 2013 voting rights case that “voting discrimination still exists; no one doubts that.”

Barrett said she would “not comment on what any justice said in an opinion.”

Asked whether “climate change is happening,” Barrett said she wouldn’t engage because it is “a very contentious matter of public debate.” Barrett did, however, say she believes the novel coronavirus is infectious and that smoking causes cancer.

Along with trying to undo the health care law, Trump has publicly stated he wants a justice seated for any disputes arising from the election and particularly, the surge of mail-in ballots expected during the pandemic as voters prefer to vote by mail.

Barrett testified she has not spoken to Trump or his team about election cases and declined to commit to recusing herself from any post-election cases.

The committee vote is set for the same day as Trump and Biden are scheduled to debate in Nashville.