The FIA ​​plans to increase the field of vision to the rear with larger rear-view mirrors for 2023. Since the Canadian GP, ​​teams have been testing new solutions from time to time. In Zandvoort, several teams drove with huge mirrors that didn’t quite fit the look of the car. But fans will have to get used to it.

The FIA ​​is serious about security. Now the association has made rear view mirror. Drivers had reported that with newer cars, their field of vision is limited at the rear. “Diagonally backwards into the three-quarter field, the view is severely limited,” reports FIA Technical Director Nicolas Tombazis. Clearly, there has already been some near-confrontation.

So the association has tasked teams with testing new mirror variants to solve the 2023 problem. A team in Montreal had already tried a normal-sized curved mirror. While the concave surface covered a large area, drivers complained that the cars inside appeared smaller. This can give an incorrect estimate of the distance.

The mirrors are quite heavy now – here’s an example from Mercedes.

Mercedes already tried a big mirror with Lewis Hamilton at Spa. In Zandvoort, Alpine, McLaren, Red Bull and Haas followed. The mirror prototype is 220 millimeters long and 60 millimeters high. That is, 50 percent more wing area than before. For a better comparison, the new mirror was mounted on one side only. Max Verstappen had the big mirror on the left and the small mirror on the right

Large mirrors also limit the position where they can be mounted on the car. “We have to avoid the drivers looking low because the mirror is in the way. There is only a small window where it fits,” explains Tombazis. The entire structure, including the bracket, is 423 millimeters wide and 187 millimeters high. The solution isn’t pretty, but safety comes first. 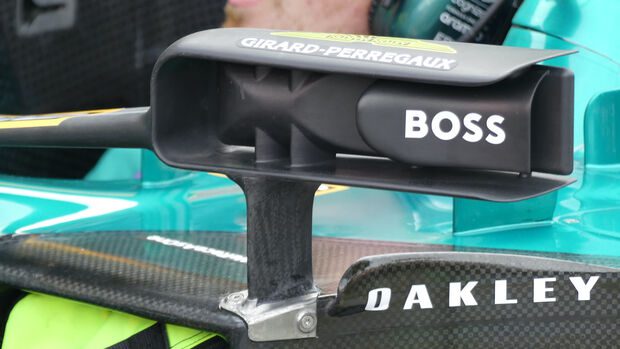 The new version of Aston Martin looks like this.

Pros and cons of new mirrors

The solution is still not perfect. Lewis Hamilton complained that the rear visibility had not improved much, but the front had worsened. Aston Martin tried to squeeze large glass into the existing frame. Disadvantages: The mirror could not be adjusted so well. “The drivers saw more, but mostly the sky,” joked team manager Andy Stevenson.

So the tests can continue in the coming races. It is not entirely clear what the final solution will look like. We’re already showing you what 2023 might look like in the gallery. We have old and new mirrors in direct comparison.