Experts agree: If the Mercedes W13 is in the works, it’s a winning car. But to win everywhere, the setup window needs to be bigger. Baku must show whether the car is taking steps in the right direction.

The Mercedes W13 is off the field. Even the common man immediately recognizes the car by its super-slim side box. The Williams FW44 is very similar to the Mercedes. But only the blind. Williams drives to the end of the field. Mercedes wants to be on top. However, so far there is only a small glimmer of hope for this to come. In Barcelona, ​​the Silver Arrows were only three tenths short of the top. Lewis Hamilton was faster than Red Bull in the race.

Even the engineers of Mercedes do not have full faith in Shanti. “We’ve always been good at Barcelona. So our good form isn’t that representative there. That made us a little happy. The old gap was back in Monte Carlo.” Nevertheless, Mercedes fired a warning shot at the competition. Lewis Hamilton and George Russell were clearly the fastest in the high-speed Turns 3 and 9. Straight away, Mercedes was again in the top ten. The sore points were the slow corners.

Mercedes stands out with the ultra-slim side box.

Experts like Aston Martin’s Andy Greene and McLaren’s James Key agree: “On paper, the Mercedes is a winning car. It has huge potential. But you have to make it work on the track.” Both teams radically changed their cars at the Spanish GP. But neither Aston Martin nor McLaren went the Mercedes way. Like the Red Bull, both now have sidepods that slope downward. That was the safe way.

You have to understand the other person first. James Key admits: “Mercedes’ approach is unique, again different from our older concept, although our sidepods were also very thin. It’s a very clever approach. I take my hat off to my Mercedes colleagues that They dared to do something like this. This car works in a totally different way from all the other cars.”

Colleague Andy Green confirms: “When I look at Mercedes, I get the impression that this solution theoretically brings the most air energy to critical points. Once they get rid of the jumpy , so this route can be very interesting. But it’s not that easy to copy. You need a purpose-built chassis to do that.”

The choice between plague and cholera

The weakness of the Mercedes W13 at the moment is its short operating window. The car can show its qualities only when driving low and hard. That’s why jumping was so deadly. Engineers had a choice between plague and cholera. If you go up with rear ground clearance, the aerodynamics no longer deliver the downforce promised by the wind tunnel. If you had stopped below, the drivers could not control their car.

The new underbody, which debuted in Barcelona, ​​lessened the car’s rocking in fast passage. But Barcelona is also a circuit that is generally shorter and harder to operate, and where the call-in and call-out floors do not trigger as quickly as elsewhere. Baku could be the real test. Even if there is no aerodynamically generated rocking, Mercedes has overcome the first hurdle. The second is to learn the car. “For us, the season only started in Barcelona.”

READ  A Matter of Taste? These are the football world cup jerseys of the teams

The Monte Carlo required more suspension travel to traverse bumps and obstacles well. If you drove too low and too hard, you had a different form of bouncing. The car fell on the road due to mechanical reasons. This is exactly the trap Mercedes fell into. 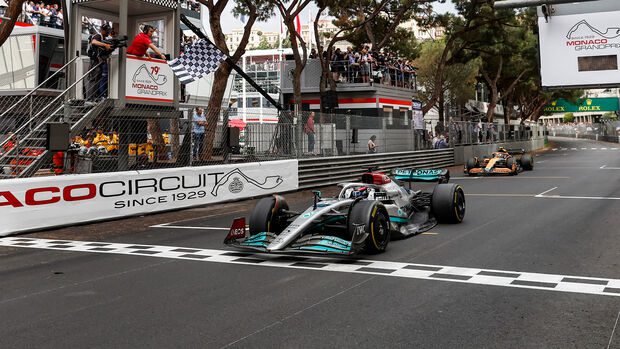 How long will it take for Mercedes to get its concept up and running reliably?

Engineers have yet to find the key to keeping the aerodynamics working reliably, even with greater ground clearance and more suspension travel. But the next two racetracks on the calendar require exactly that, as the engineer puts it: “Baku and Montreal have the same requirements as Monte Carlo. The only difference is: You have longer straights. But you have to have more ground clearance.” , requires a stable aero platform and a stable one. “Heck. We haven’t got all that yet. The next time we’re definitely going to fight on top will be at Silverstone.”

Silver Arrows should be able to win everywhere by the time of the English GP if you want to play your part in awarding the World Championship title. The double strike in Azerbaijan and Canada is another area of ​​experimentation for Mercedes. Mercedes apparently has another construction site. The setup window has never been particularly large before. But at that time chassis technicians had the equipment to keep the car in the desired window without mechanical damage.

As of this year, it is no longer possible to reduce vehicle targeting on the Straits. Mass inertia dampers are prohibited. With the recently fixed conventional springs and dampers, Mercedes apparently still has difficulties controlling the height of the vehicle. One engineer revealed: “Our mechanical problems were concealed by aerial problems. It wasn’t a trigger for aerial problems, it was an amplifier.”