Indeed, football is clearly the number one sport in Nigeria, but basketball is catching on at a rapid pace. Not least because the men’s national team achieved a great coup: in early July, the “D Tigers” became the first African team to win against the United States. An astonishing 90:87 success against the world number one in a friendly match in Las Vegas was a healer of old wounds. At the 2012 Games in London, the Nigerians suffered their highest ever Olympic defeat against the American team with a 73:156.

Nigeria will take on Australia, Germany and Italy in Group B at the upcoming Olympic Basketball Tournament to be held in Tokyo. If the “Tigers” survive the group stage, it will be a first for an African team – even if the team is made in America.

Under the direction of Mike Brown, assistant coach for NBA club Golden State Warriors, Nigeria has made a huge impact on the American expatriates in building their national basketball team. In the Olympic squad, for example, the NBA club Detroit Pistons is the centerpiece of Goth Okafor, a former U17 and U19 player in the United States. Ten of the 15 players who attended the final pre-Olympic training camp were born in the United States to Nigerian parents. The other five saw daylight in Nigeria, but later moved to the United States, Canada or Australia.

“Many Nigerian parents living in the US want their children to play for their country of origin, so there is a lot of interest in the Nigerian basketball program,” Patrick Omo-Osagi told DW. The former Nigerian youth player works as a basketball referee and sports consultant in the US state of Texas. “If successful, more players will see Nigeria as an opportunity to play basketball at the international level,” Omo-Osagi said.

From AfroBasket to the NBA

For decades, African basketball was dominated by Angola. A country with a strong domestic league has won the continental championship “AfroBasket” eleven times. Nigeria, on the other hand, despite its large population, struggled for a long time to compete with its African neighbors – even though the country produced one of the biggest NBA stars of the 1990s along with Hakeem Olajuwon. Because Nigeria was not making great strides at the international basketball level at the time, Olajuwon decided to play for the USA team and won a gold medal at the 1996 Olympic Games in Atlanta.

The current Nigerian team is full of players who were born in the United States.

In the 1980s and 1990s, Nigeria began sending young players to American colleges on basketball scholarships. It paid off with a third place in AfroBasket for the first time in 1995. But it took another 20 years for Nigeria to beat Angola in the final of the African Cup of Nations in 2015, thus winning their first international title.

Critics complain that Nigerian basketball is heavily focused on Nigerian-American athletes. “It is not a crime to be born in Nigeria,” said former national team captain Olumide Oedeji, who did not give local athletes a chance to represent their country. The now 40-year-old former center played a total of 93 games in the NBA for the Seattle SuperSonics and Orlando Magic and led the Nigerian team to its first Olympic participation in 2012 and its first AfroBasket title in 2015.

In Nigeria, the men’s first division is currently on hold due to a dispute over the top of the National Basketball Federation (NBF). He mainly defends the strategy of betting on foreign players of Nigerian origin. Bas Ogunade, Vice President of the NBF, said, “The role of the Association is to develop and promote the sport to the best of its ability. Nigerians from all parts of the world have the right to represent the country.” “What works in this context is talent and ability.” The failure of the best Nigerian club River Hoopers at the Premiere of the Basketball Africa League – compared to the Champions League in European football – last May showed players active in Nigeria are not competitive, says Ogunade. 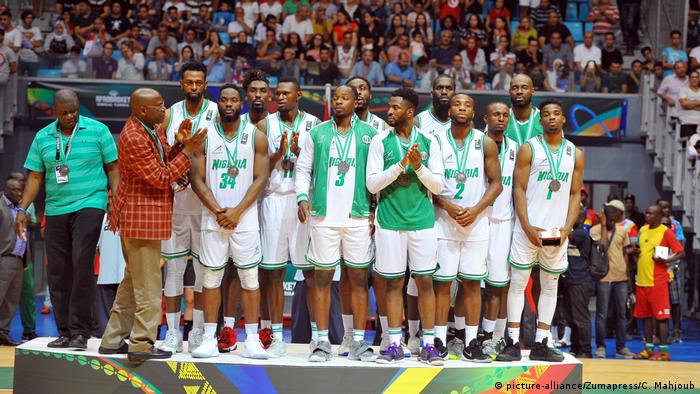 In the 2017 Africa Championship, Nigeria finished second behind Tunisia

Bode Oguntuyi, Nigeria’s leading basketball journalist, said: “The lack of professional basketball in the domestic scenario has limited opportunities for many players to show themselves.” “But at least there are more and more former players and scouts who organize basketball camps to select the best players and then send them to US colleges.”

There is an increasing number of Nigerian basketball players in US basketball. Eight players of Nigerian origin were selected by clubs in the last NBA draft in 2020. 19 and are already active in the best leagues in the world – in all sporting conditions. It remains to be seen whether this development will make Nigerian basketball more successful in the long term. Omo-Osagi, a Nigerian basketball expert based in the US, warned: “At present it is fashionable for Nigerian-American basketball players to play for Nigeria. This enthusiasm may also fade in the future.” “At some point we need to have a good program at home so that we can add local players to the team. Otherwise it doesn’t make sense to have a Nigerian federation.”

A Nigerian men’s basketball team will compete in Tokyo for the third time in a row. “We promise that our players will work hard and look good,” said NBF vice president Ogunade. The team is the only African team in the Olympic men’s and women’s basketball competitions. “Every game will be tough, we won’t give or ask for an apology.”