On paper everything looks very clear: seven wins for Red Bull, two for Ferrari. Although this time Ferrari was even faster in the race. Ferrari weakened this time with an early penalty for Charles Leclerc. And Red Bull wins thanks to Max Verstappen.

The duel between Red Bull and Ferrari is still a matter of tenths of a second. Both the cars are equal to each other with different qualities. And at least half a second ahead of the rest of the field. Despite the balance, seven wins go to Red Bull and two to Ferrari.

Ferrari hasn’t won since the Australian GP. External factors have often dictated the face-to-face race. In Barcelona and Baku, Charles Leclerc’s car had engine problems. The strategy failed in Monte Carlo. And in Montreal it was the result of the misery of the engine. Leclerc could not win from the last row. But he could have done that if he had started from where he has started six times this season. From front.

For the first time this season, Max Verstappen also had to fear a second Ferrari. On Sunday, Sainz was in a speeding car. The Spaniard estimated his advantage at three tenths. He would need six tenths to overtake. At top speed both cars were within 0.7 km/h that day. Satisfaction for Ferrari: Sergio Pérez’s gearbox failure proved that reliability is a bug bear for both championship rivals.

Verstappen won narrowly ahead of Sainz.

After the race, both teams looked for reasons to reverse the legalities in Montreal. Usually the balance of power is mirrored. Ferrari is slightly better on lap one, Red Bull on the distance. Neither side involved was able to give a conclusive answer. observation only. Verstappen had more grain on the front middle tires and lost grip on the rear tires faster than the Ferrari in his rear-view mirror. But he had the class to make up the losses.

The course of the race speaks to better tire management at Ferrari. There can be many reasons for this. After the third practice session on Saturday, Red Bull had to make some setup changes. Red Bull did not bring their rain tires up to temperature and it was expected that it would rain in qualifying as well. Verstappen’s pole position effectively showed that the engineers had found a solution. But was it even good for a dry run on the green track? It seems that in completely different circumstances the tires suffered more damage.

Leclerc, on the other hand, managed to dedicate his 100% to prepare for Friday’s race. Shortly after Baku he knew Ferrari would impose a fine on the engine. So there was no point in chasing time for him. “It’s frustrating for a driver when he knows he has to start from the back. But Charles took it very well,” praised team boss Mattia Binotto. Leclerc’s experiences from Friday also helped Sainz in the race.

The Spaniard in the team showed his best performance of the season in Montreal. For the first time ever, he had full confidence in his Ferrari F1-75, which has a strong grip on the front axle, which sometimes makes the rear a bit unsteady. “I felt a lot more comfortable in the car than before and was able to push the limit to the last lap for the first time,” Sainz confirmed.

READ  Four Hills Tournament: Duels of the Germans in Garmisco

Verstappen hasn’t got a second rest in the last 16 laps. “Carlos was always in DRS territory. Every time I looked in the mirror exiting the curve, Ferrari was there, filling the format. But he never had a real chance to overtake.” Team owner Christian Horner praised his star pilot: “Max did a great job. He didn’t make the slightest mistake under all the pressure.”

In a race with two VSC stages and an actual safety car, the Strategists were also in demand. In the first VSC stage, Red Bull attacked. “We wanted to get rid of our medium tires quickly because of the grain,” Horner explained. Ferrari left Sainz in the hope that the Grand Prix would present more gifts. It was time in round 20. Sainz caught it. 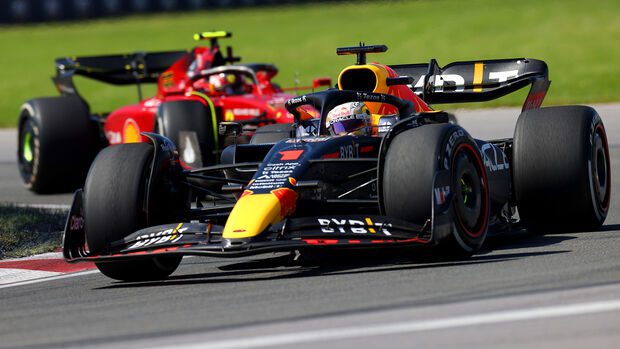 With six successes this year, Verstappen is on course to lead the World Cup.

The tire delta of eleven laps in Ferrari’s favor quickly began to make itself felt. Sainz closed the gap in small steps. 9.4 to 5.9 seconds. The faster Verstappen’s complaints about tire fall grew, the more clear he was going to need a second stop. And Sainz? He risked staying on the track when Verstappen picked up a second set of hard tires on lap 43 and came back 10.8 seconds earlier. To his amazement even behind Lewis Hamilton.

Mercedes quickly overtook. When Yuki Tsunoda started a safety car stage, Sainz’s gap narrowed to 7.7 seconds. Ferrari held it, even though Sainz lost the lead. Strategists still asked themselves whether soft or hard, but then resorted to the conservative version. “In retrospect, maybe we should have tried softer tyres,” Sainz said. “We didn’t expect the safety car to be out for so long and the remaining distance to shrink at race pace. A softer one over 16 laps probably would have been a better tire and would have given me a better chance to attack Max.”

The safety car phase came uncomfortably for Verstappen, even if it meant he took the top spot without a fight. “It turned me from an attacker into a defender with slightly older tires. I love to attack.” Horner dares to answer the question of who would have won without the safety car with a clear “us.” Sainz would have been caught ten laps before the end, the simulation said.

Binotto wasn’t so sure. “It certainly would have been tighter, given the way Max caught up. We would have considered a second stop to defend ourselves against Hamilton even without a safety car.”