The new STARZ original series debuts on Sunday, August 15 on the STARZPLAY premium streaming service in Europe, Latin America and Japan, as well as all STARZ platforms in the US and Canada.

“Heels” is the story of men and women who pursue their dreams in the small-town professional wrestling world. Set in a small Georgia community, the series follows a family wrestling promotion in which two brothers and rivals battle for the legacy of their late father. One good in the ring and one is to play his opponent, the heel. But in the real world it can be difficult to do justice to these role models – or even to leave these roles behind.

The cast of the drama series also features Alison Lough as Jackson’s wife Stacy Hoe, who has to deal with the effects of a highly emotional sibling duel in her family’s wrestling business. Mary McCormack plays Willie Day, a business partner of Jack, who serves as the logical brainchild of the wrestling organization. Kelly is Berglund, Crystal Tyler, Ace’s ring manager and her secret lover. Allen Maldonado slips into the role of Roster Robbins, one of the region’s best wrestlers, who always has something to prove and does justice to it. Two-time Super Bowl champion James Harrison adopted a wrestler, Apocalypse, who has been in business for decades and no longer expects fame and glory. Chris Bauer plays Wild Bill Hancock, a former great wrestling star who is now a senior professional wrestling scout.

Waldron, O’Malley and Segal, along with Julie Yorn (Hell or High Water, White Boy Rick, The Dirt), Christopher Donnelly and Patrick Walsley of LBI Entertainment, make up the executive producer team. “Heels” is produced by Lionsgate TV for STARZ in collaboration with Paramount Television Studios. 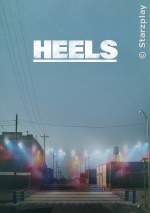 Set in a small Georgia community, the drama series follows a family wrestling promotion in which two brothers and rivals battle for the legacy of their late father. Heels.